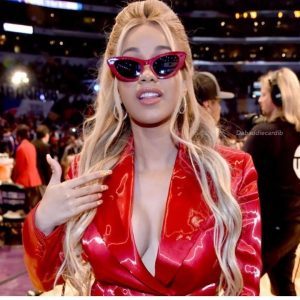 Cardi B has denied creating a “Finsta” Instagram account so that she can be dissing the likes of Nicki Minaj, Ariana Grande, and others she is allegedly not in good terms within the entertainment business.

She said she is fed up with all the lies and tired of explaining herself to people. This comes after seeing the #CardiBIsOverParty topic trending on Twitter.

CardiB in replying to the trend, ended up posting a video online claiming that these are lies and that weird people are behind this. Many people also say that Lil Kim follows this page as well.

“I was like what the f*** did I do now?” asked Cardi. I haven’t been doing anything,” What I did? “I don’t know. These people must think that I’m a 15-year-old girl. They claim that Lil’ Kim follows the page, that my hairstylist, makeup artists, and sister follow the page. And they never did.”

Cardi went on to say that she doesn’t know Kim well at all.

Regarding Grande, she was confused about that accusation too by asking why would she talk about her and how she likes her music in general.

Cardi added that she and Doja Cat have the same hairstylist and that a lot of people she knows work with Megan Thee Stallion and how everyone is cool with each other.

“I don’t have issues with none of these girls. I don’t know why you guys want me to have issues with these people so badly,” she said. “Don’t make lies about me. It’s tiring. It’s annoying.”

Cardi didn’t let any of this bother her as she believes the fake finsta account makes her feel powerful knowing that someone would do that. She also added that she’s been working on new projects despite not releasing music in the past eight months

“I do feel really powerful. The fact that I haven’t dropped music in 8 months. I haven’t announced none of the projects I been working on. All I been doing is eating food & people have to make fake edits to cancel me it makes me feel like IM THAT B*TCH !”

Singer Lizzo Says She Had ‘The Best Birthday Of All Time’

Cardi B And Offset Finally Buy A Home In New York