Popular Climate and Environmental activist, Greta Thunberg has been named Time Magazine person of the Year for 2019. She is making history for her recognition, as she is the youngest ever to have been named so, at just 16.

Greta Thunberg rose to prominence after launching the school strikes for the climate movement, which has grown into a global phenomenon.

She is now one of the best-known figures leading the charge for tackling climate change the world over. 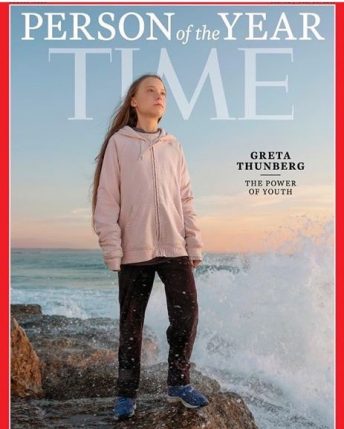 Time magazine in naming the 16-year-old Swedish activist as their person of the year, said:

“For sounding the alarm about humanity’s predatory relationship with the only home we have, for bringing to a fragmented world a voice that transcends backgrounds and borders, for showing us all that it might look like when a new generation leads, Greta Thunberg, is TIME’s 2019.”

Prior to naming her person of the year, she was recognised as one of the 100 most influential people in the world by Time magazine.

Rotimi Akinosho Reveals He Bought A Penthouse In Ikoyi For Birthday

Moniece To Stop Speaking About Dr Dre After Threats

Belarus May Join Russia In The Invasion Of Ukraine -U.S

President Joe Biden To Kremlin: “I Do Not Apologize”