American singer, Ciara and her husband Russell Wilson are making major billionaire moves, as they announce that they are now proud team owners of an American Major League Soccer team, the Sounders FC.

Ciara who broke the news on Tuesday night, showing her family and herself with other major new co-owners of the American Football team, the Sounders FC, said she is proud to be a woman and owner of a major League team.

Taking to her Instagram page, she shared a short video of her husband Russell Wilson who is the highest-paid NFL athlete, and their daughter at their unveiling with 10 other new team members in Seattle, captioning the photo with these words:

“A Day I’ll Always Cherish! @DangeRussWilson and I are fired up to announce we are Team Owners of the Seattle @SoundersFC one of the best soccer franchises in the world! We can’t wait for our kids to grow up loving Soccer! Family is everything! Football and Futbol is Family! #SoundersIsFamily ⚽️💚💙”

The proud mother of two thereafter shared her dream and what she hopes for her daughter and other girls to achieve, especially in a world where men occupy virtually every position of decision making. She had this to say about her new role as team owner of Sounders FC : 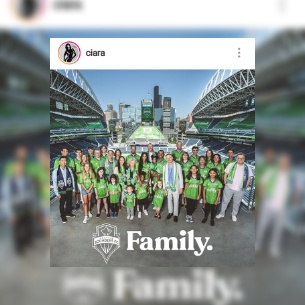 “Baby Girl,
You will be able to do anything you put your mind to if you simply believe! Never walk in a room thinking of what you can’t do because of your gender! If you think it, it’s possible. If you dream it, it’s possible. If you believe it, it’s possible. It’s that simple.
There’s only a small handful of female owners of any Major League Sports team, and I’m proud to be one of them! You are next baby girl! I have no doubt that by the time you’re my age, there will be many more!
Go Si Si mama! Baby Girl You’re Next! …And to every girl in this world, you can do anything you want to do and be anything you want to be! It truly possible if you believe.
#WhyNotYou”

The Ciara news comes a few hours after Seattle Sounders FC announced on Tuesday the new changes to the Ownership Group with Owner Joe Roth selling his stake in the club to a collection of local investors. Those new owners include the likes of musicians Macklemore and Ciara, her husband who is the Seattle Seahawks quarterback Russell Wilson and a total of 11 families with deep Seattle roots.

A big move for Ciara and others, as this is just one of many investments that Ciara and her husband Russell Wilson are looking to add to their portfolio.

…congratulations to them and the team!

Tricycle operator killed over the right of way in Surulere Lagos

Ben Yedder writes Sevilla fans after his move to AS Monaco

PHOTO: Leon Balogun Confirms His Move To EPL In A Farewell Message To Mainz Fans

See the list of 24 countries qualified for Total AFCON 2019

PHOTO:Mercy Johnson and Husband Love Up In New Photo