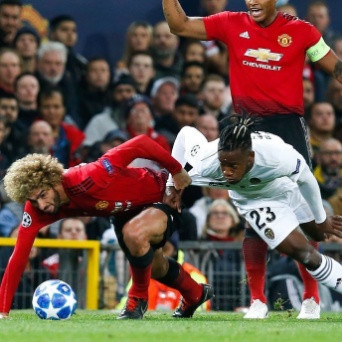 Valencia has inflicted more pains on Jose Mourinho and Manchester United as they held the English Premier League giant and most successful Premier League club at their own backyard with a goalless draw at the Old Trafford ground.

Manchester United completed the poor run of form in three competitions , stretching their poor results to four games without a win.

They were knocked out of Carabao cup by Derby county, losing against West Ham and now playing out a goalless draw against Valencia in their UEFA Champions League second group game.

The result means that manager Jose Mourinho has failed to record a win in four games after their last victory against Young Boys a few weeks ago at the UEFA Champions League.

Mourinho picked the team he felt could give his team the all important three points, with the back-to-back game against Juventus to come next, with a line-up of Sanchez, Matric Rasford, Lukaku, Fellaini, Pogba, Luke Shaw, Valencia, Bailly, De Gea, and Smalling.

Unfortunately for Jose Mourinho, his players played with no passion as they looked tired, static and looking more like those that were being forced to be on the pitch!

All I could sense watching the game was a team with depleted dressing room and no leadership on and off the field.

The result would have been very different and in favour of the visiting team, if Valencia had been more clinical in front of goal, as they had upper hand against their host, with so many missed opportunities.

Even as his team struggled to impose authority in the game, Jose Mourinho did little or nothing at the touchline to push his players to do more as the fans at the Old Trafford kept chanting ‘attack! attack! to a team that lacks hunger for a result after a horrible run of results.

Manchester United are in a difficult state as they will play Juventus and Chelsea in the next few weeks, which if they do not pick up their form could see them being knocked out of the champions League and drop further on the League table.

According to record, this is the worst ever start for Manchester United as a club for 26-years! …I guess the famous quote of a former coach of a rival club being labelled “specialist in failure” is gradually coming back to bite him..lol

PHOTO: 50cent Gift Himself With A Rolls-Royce Phantom And G-Wagon For 43rd Birthday

Kylie Jenner Back On With Baby Daddy, Travis Scott

PHOTO: See The Hotel Neymar And Brazilian Teammates Will Be Staying In Russia