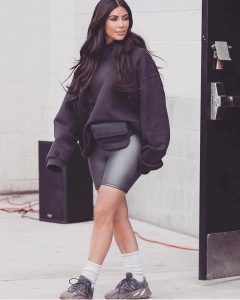 kim Kardashian taking a walk in her Yeezy outfits

Reality TV Queen, Kim Kardashian has taken to her social media page to share a photo of her husband Kanye West and Daughter North who were joined by Kanye’s father Ray West, as they show support to march for our lives rally in Washington. Kim who clearly was the camerawoman here, showed the photo of husband Kanye carrying North their first child on his shoulders, as they joined hundreds of thousands of other children to march for gun control in the United state.

The March For Our Lives Rally was a rally organised by a group of students across the United state to demand stringent gun control law, as hundreds of thousands gather in DC to protest. This is coming after the unfortunate killing of 17 parkland students by a fellow student with an automatic riffle. Why most parents in the US came out with their children to support the protest, some celebrities just like Kim, wanted to share the moments with her daughter North, as her husband and father-in-law all came out to give their support. She took to her Instagram to caption the photo with these words:

What an amazing day yesterday to take my daughter to Washington DC to see our future leaders speak. Having my daughter march along-side her grandfather and parents was a day I hope she remembers forever. I know that the younger generation will vote to change these gun laws that so desperately need to be changed. Hearing these stories yesterday and meeting so many families affected by gun violence was heart breaking and I hope when it comes time to vote we all step up and vote to protect our children.

Ndidi and Dinma share first photos from their traditional wedding

How I almost died from toxicity of breast implants-Yolanda Hadid

Gary Rhodes Cause Of Death Revealed By His Family