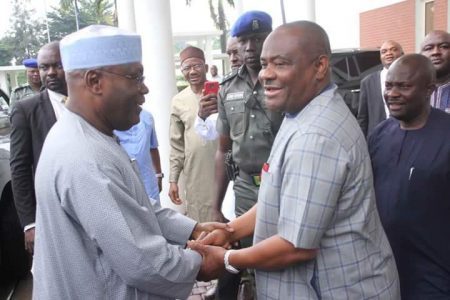 The Former Vice President who has made known his intention to contest the 2019 Presidential elections under the Peoples Democratic Party, was on Thursday the special guest for project commissioning in Rivers State, that have seen the likes of former President Goodluck Jonathan and Speaker Yakubu Dogara also giving the honour to commission projects in the State.

Atiku who was formerly of the All Progressives Congress while commissioning the project, praised the two time Governor of the year, saying:

Since May this year as part of the Third Anniversary of Governor Wike’s administration, one project is commissioned each day. The Isiokpo Internal Roads form part of the projects.

No wonder, Governor Wike keeps winning the “Best Governor of the Year ” consecutively since 2016. No governor has achieved that record. It will be very difficult to beat that reord.

I am extremely proud of Governor Wike’s achievements and we are proud of the governor’s leadership “.

On his own, Governor Wike who his well known as very outspoken and blunt, did not hold back on his assessment of previous government in the state, saying they could not commission projects as there was none. He said:

When we make promises, we fulfill our promises. We are not like those who make promises and give excuses why they cannot be achieved “

Police recovers bodies of Bureau de-change operators in a soakaway

PHOTO: Omoni Oboli Starts Count Down To Her 40th Birthday With Stunning Photo

Ex-wife of Oba Ogunwusi, Zaynab congratulates him and new wife

Plateau Killings: Atiku Bemoans Spate Of Killings In The Country, Calls FG To End It Now