The Governor of Lagos State, Mr Akinwunmi Ambode earlier today, went for an inspection tour of some ongoing road projects in Lagos state. He paid a visit to contractors handling the expansion and rehabilitation of the Airport road along the popular Oshodi road.  The governor who was impressed at the pace of work, pledges to expand the construction to Ladipo market, up to the Guardian Bus stop along the road. 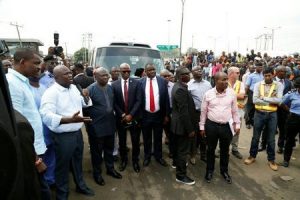 The road which is a ten lane expansion, will also see the old Oshodi market having a new face lift, with car parks and Bus terminals to service the various routes of the mainland and island.

The Governor, in his response after the inspection, said:

The ongoing expansion and reconstruction of the Oshodi – International Airport Road will be expanded to include parts of the Oshodi-Apapa expressway, Ladipo International market onward to the Guardian press. We remain committed that no segment of our State, irrespective of colour, race, faith and status will be left behind.

Yemi Alade And Spice Share ‘Bubble It’ Behind The Scene

Nia Long: Ime Udoka Had An Affair With Travel Planner