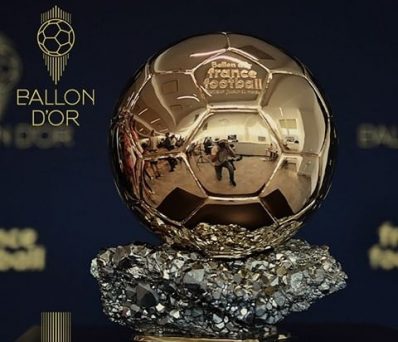 The nominees for the 2021 Ballon d’Or are out, as 30 players across the major European top clubs made the list for the football prestigious award.

Players from Chelsea, Manchester United, Paris St-Germain, Bayern Munich, Manchester City, and others made it into the list for the 2021 Ballon d’Or award. But most importantly, the two usual suspects who have won it the most, Messi and Ronaldo who will be battling it out with the likes of Kante, Lewandowski, and Jorginho, were also nominated for the award.

Messi who now plays for PSG, was the 2019 winner for a record sixth time, and Cristiano Ronaldo who now plays for Manchester United, has won it five times. But Jorginho who already won the European Best Player award, and  helped Chelsea win the Champions League last season before victory at Euro 2020 with his country in the summer, is favoured this time to win it.

There are 14 Premier League players on the 30-man 2021 Ballon d’Or shortlist and five members of Italy’s European Championship-winning squad.

The Ballon d’Or, organised by France Football, is awarded annually to the world’s best footballer.

The prize was not given out in 2020 – for the first time since 1956 – because of the coronavirus pandemic.

The winner of the award will be announced on 29 November at Paris’ Theatre du Chatelet.

Nigerian Stowaways To Remain In Spain And Seek Asylum

Constance Wu Says She Was Harassed By A Producer

Impeachment Trial: I Got Impeached For Making A Phone Call- Trump

Tiwa Savage drops the visual to her new single, 49-99

Kourtney Kardashian, her ex Scott and girlfriend spotted in Mexico