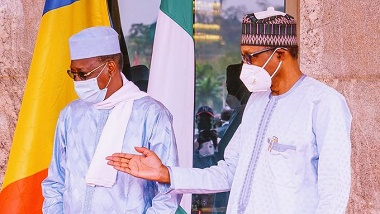 President Idriss Deby of the Republic of Chad is on a one-day official visit to Nigeria, as he was received by President Muhammadu Buhari at the Aso Rock Villa on Saturday.

According to the statement released by the Presidency, President Idriss Deby and President Muhammadu Buhari discussed bilateral issues ranging from security to the recharging of Lake Chad, as the two countries look to further strengthen their relations.

President Idriss Deby arrived at the State House forecourt about 12:15 pm and he was welcomed by his host President Buhari, who introduced some members of his cabinet to him.

President Buhari during his discussion with the Republic of Chad leader, said:

“It is imperative that there be water transfer to the Lake Chad from the Congo Basin, so that the people can resume their normal lives,”

President Buhari added that with inter-basin water transfer, farming, fishing, animal husbandry would resume, and curtail irregular migration of youths, who now dare the Sahara Desert and the Mediterranean Sea, to get into Europe, seeking greener pastures.

“I’ve been engaging with the relevant stakeholders in Africa and beyond, on why we need to recharge Lake Chad. Nigeria will benefit more, but it is also advantageous to everyone,” President Buhari added.

Super Eagles Of Nigeria Beats Benin To Qualify For AFCON