Actress Joke Silva is getting bashed on social media for congratulating President Muhammadu Buhari and referring to some members of the leadership of the All Progressives Congress (APC) ‘League of extraordinary gentlemen’.

The veteran actress who has before now kept mute on who she was supporting in the just concluded Presidential election, quickly took to her social media page immediately the final results were announced by the Independent National Electoral Commission (INEC) declaring President Buhari and APC winner of the election, to congratulate them.

Although actress Joke Silva is entitled to her personal views and who to support but given the mentality of some very few Nigerians who always feel like all views must align, since her post,she is being dragged for congratulating President Buhari for his victory, as to them, she ought to have remained mute and not voice her opinion about the election, or better still support Buahri…lol…
This was the post by Joke Silva that has been causing so much drama on Instagram…her own personal page for that matter oh…lol…
Putting up this photo, she captioned it with: 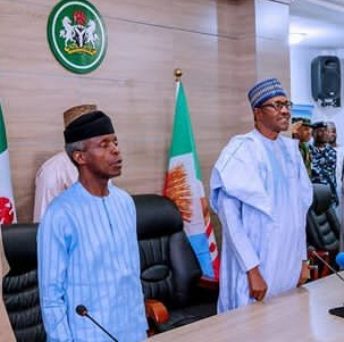 “Congratulations. Well done. League of Extraordinary Gentlemen. Now hit the ground running. Consolidate. 4years is a short time. Power needs to be sorted….without it we are going nowhere fast…Apapa port…soo much. God be with you ..guide you…give you wisdom.”

@ajokesilva please ma which who and who was member of pdp for that 16yrs.check well half to this so called gentle men.both party are scam to this our dear nation.

@mr__maintenance am so disgusted too. Just to curry favor! May I never be like this when I am that age. I will rather work my bones off that to support injustice for money! God forbid

Hmmm mama ajoke am highly disappointed in you ma, I reserve my comment just bcos of the respect I have for your husband @ajokesilva

You expressed your opinion. That’s fine! Well, opinions like yours make me question if they portray integrity or opportunism. In any case, let your price be your judgement @ajokesilva

@ajokesilva never been so disappointed, you just wanna ruin your reputation that’s if you have one.. Guess you’re tired of being married to your husband. You’re fighting for the post of First Lady don’t worry you’ll end up being his second wife. Rubbish.

Hmmm. I guess everyone is entitled to his/ her opinion. Maybe the election was rigged, but we cant change the fact that we have BUHARI for another 4yrs. Gird your loins people. No matter thr government I’ll survive. However, change can only come in Nigeria when we stand up with one voice. Till that day comes, God bless Nigeria?

Mama Jay, well said somebody should recommend you to be on board, solution is written alk

And you shall know the truth and the truth shall set you free. No more comments

Who are the gentlemen? These ones? Hmmmm corrupt individuals….

@olara12 I pray this same karma hit you too or ur kids. A man who so many people died in the name of him trying to ring election. And she called them gentlemen

Yes ooo @ajokesilva give them the endless list of Nigerians expectations. Me for one, I am hopeful sha.

Hmmm mama ajoke am highly disappointed in you ma, I reserve my comment just bcos of the respect I have for your husband @ajokesilva

@givenssara she has the right to support who ever, why will she call dsame people that killed so many all for ringing. Is she not a woman does she know the pains the mothers of those victim are passing through?

@candysolomon24 My dear many pregnant women were in pains during the October crisis in Kaduna, no food, freedom was seized for days and Many died of hunger, Many died because they were seriously sick and there was no Movement or car to take them to the Hospital a Yoruba journalist was Mobbed on that Faithful day on her way to kano, and she sees nothing wrong with that even the vice president that’s a Pastor couldn’t say anything or help the little way he could they all left Kaduna to their fate… One thing am sure God is not a respecter of Man..

@zamifa if I support the evil been done by this government by killing people all for ringing sake amen. But if I did not support you sha have a share of it.

@arantefaj yes sure but not taking lives that we can’t create all for ringing. She is a mother let her put her self in the shoe of those women who their sons and daughter died all for ringing, by the same people she called gentlemen.

@ajokesilva please ma which who and who was member of pdp for that 16yrs.check well half to this so called gentle men.both party are scam to this our dear nation.

Because PDP didn’t win the election was rigged, my people let’s drop the insults and pray for Nigeria. Most of here didn’t vote but expecting magic. Mummy J I love you ???

Disappointed is an understatement.

the only gentleman amongst them is PYO. I honestly dont understand what he is still doing there, here’s hoping that God has a mission for him like Esther because these other people are utter rubbishes!!!

Hmmm… the “extraordinary gentlemen” Is my problem in this your post. It’s really sad.

@cassy_demuwa lol ur funny he stayed in office for 4yrs wat did he do for the country, then it’s now that he wants to work, ur matured enough to know the truth, I don’t know if ur blind and can’t see the damage he had caused for this country. And plz no one is disrespectful, everyone had the right to express their feelings.

I believe Mrs Joke Silva must have been hacked! She couldn’t possibly have posted this.?

Madam like really? May God treat you and yours the way Buhari is treating Nigerians. May the your house and family become a turmoil as Nigeria is this past four years. May the cries of the poor, students, orphans and those killed in Benue be recycled in your home. Shameless woman. God punish you @ajokesilva

The hate comments is more than the congrats something is wrong ? ma’am you’re someone I respect so much, you have young people looking up to you, I feel disappointed ???

You just lost my respect. You are part of the problem ooo. How can you see everything that happened and still say this, may that same God you have called visit you in your support of evil

Kai and I have been folliwing you since…. biko shift… where is unfollow button biko…lubbish

aunty ajoke much respect to u as a person but am disapointed at u over this ur write up u ve lost my respect.

I respect u so much ma….. but m disappointed with this post of urs….. wit all that has happened. I tink think people like u should come out and comdem the act of INEC. I don’t care who wins…. but from my thinking wit ur well right way of reasoning whr in the world do election done like this and you her evening congratulating an evil act….. all becos ur guys one to be associated wit Power. Nigeria is bigger than you Ma… What legacy are u leaving for ur Grand children.

I don’t even know wot to think about Nigerians and our stands anymore,who do u trust ? @ajokesilva has anything changed in the past years ma ? And yet u pple don’t want to speak for the masses .. it’s well !!

We are our own problem in this country. This election wasn’t free and fair and you know it, congratulating people who do not want the progress of the country. Disappointing and sad. This is so wrong, oh well its your page so if I don’t like it I better unfollow. @ajokesilva

Ma, all those who want to unfollow you let them start now as they were never with you in the first place. Politics does not affect love. If i were you l will start blocking them all. Anyone who curses you is vile and sick to the stomach. Cut them off. You are a true lady and some of us love u irrespective of your political views. Miserable people.

Why are you people lamenting here. She is entitled to her opinion just like you all are. Must she tow your line? That’s the problem with this country. By the way, while you were busy on social media taking and posting selfies, the people who voted for him were pursuing their goals. Why don’t you all redirect your negative energy positively and restrategise. Abi ina go vex for four years? Nawa o

You dont have to be disappointed and you dnt have to insult @ajokesilva..everyone has an opinion and that’s her own opinion so why are you hating on her.. Abeg lets enjoy the 4yrs in peace+ all we need to do is be prayerful

4 yrs of APC has become worst than 16 years of pdp. What am I even saying, weren’t they all pdp members at some point. I wouldn’t support any party but the man. If you speak of the men then I can probably understand what you are saying but if you speak of party all I can say is enjoy whatever you are getting. It happens. @ajokesilva

One Joseph Ekemezie bags one Year jail term for fraud

Rihanna And A$AP Rocky Dine Out Days After Arrest

Pastors should reward Choir members this Xmas with 50-100k-Timi