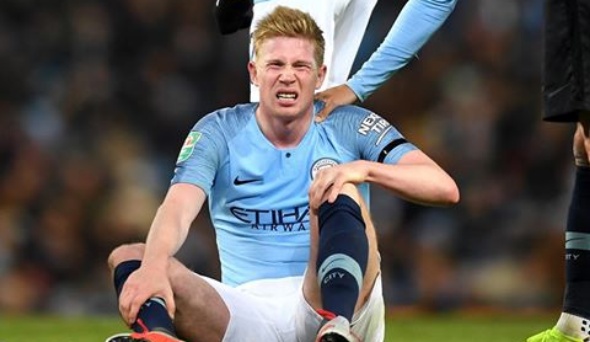 Manchester City: Kevin De Bruyne has been ruled out for six weeks

Manchester City midfielder, Kevin De Bruyne has been ruled out yet again, and this time the Belgian will be out for about five-to-six weeks.

Kevin De Bruyne sustained his latest injury last night in the Carabao League Cup against Fulham and will be on the sideline once again, for some weeks, after only returning some few days ago.
Manchester City confirming the injury sustained by Kevin De Bruyne, said:

The Belgian underwent scans on Friday at the CFA. No surgery is needed but he is expected to be out for between 5-6 weeks.

At Friday’s press conference boss Pep Guardiola said:
“Unfortunately he is injured but fortunately he will come back in four-six weeks,” before adding: “He was so sad. But today less sad and tomorrow he will be stronger again. He can spend time with his family, then it’s international break and then he will be back.”

“Kevin De Bruyne is out and we are sad for him, nobody likes to have injured players but he will come back to the player he is and he will be fine. It is what it is but fortunately it is not surgery and he will be back”

On other players and his injury list, Pep had this to say:

Laporte is strong and physical, he has a good personality and the arrogance to play at a high level. He’s fresh for us because he has not been selected for the national team. But he is a young player and we are so satisfied at his level so far.

Yesterday DeBruyneKev was so sad, but he can spend this time with his new boy and his family. But after the international break he will be back stronger to help us achieve our targets.

I am impressed with the quality Southampton have in the middle and at the front. They have huge talent and are so deep and so physical. It is so complicated to beat them. We must be sharp and move well and be clever. It will be a tough game.

Guendogan is training with the team but he is still not 100%. Otamendi still has a little problem. He’s not training but he is strong and maybe tomorrow he’ll tell me he’s ready.“

Olujonwon Obasanjo is only with Buhari to learn his secrets-Reno