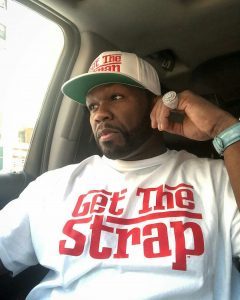 Now if this is not genius I do not know what else you want to call it. I mean selling those three words for a million dollars just like that? This shows Curtis Jackson famously known as 50cent, sure knows how to do business, and even though he pretends to have gone bankrupt, I feel what he meant is, hey! I am about making myself few more dollars! just like he did with his bits coins…He is surely getting the strap!

The rapper who broke the news on his social media page put up a photo of himself having a haircut, with this caption:

l did a deal today l sold (get the strap) for a million dollars to Viacom’s Bellator. So you will see lt on some cooler clothing shortly. ?see how l make something out of nothing. LOL

The former G-Unit leader who is well known for his “get the strap” on his Instagram page, is ranked one of the top six millionaires in hip-hop world, behind the likes of Jayz who is ranked number one, Puff daddy, Dr Dre, and himself could be eyeing the billion-dollar mark just like the others, and could possibly see his ranking go up in the Forbes list come 2018 ending.

According to Wikipedia, Viacom is an American multinational media conglomerate with interests primarily in film and television. It is currently the world’s ninth largest broadcasting, cable, and media company in terms of revenue, and has headquarters in New York City and Hollywood, California. Voting control of Viacom is held by National

Chrissy Teigen And John Legend Get A New Dog

Megan Thee Stallion Files A Lawsuit Against Her Record Label

Actress Amber Heard Vows To Stand By Her Testimony