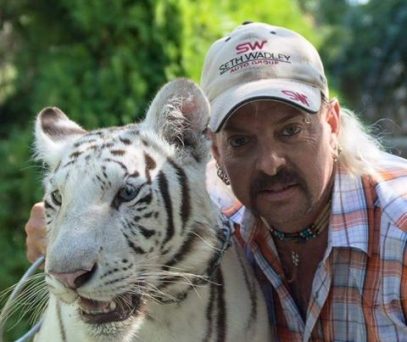 President Donald Trump has told reporters that he will be looking into the case of Joe Exotic ‘Tiger King’ star and convicted felon.

According to the report by TMZ, President Trump said this, after his bizarre exchange with reporters on Wednesday during the coronavirus taskforce briefing.

The reporter asked Trump if he’s heard of the popular Netflix series, and, if so, might he consider commuting Joe Exotic 22-year prison sentence.

“I’ll take a look,” Trump told a Post reporter when asked about the case and his son’s support for a pardon during a White House briefing

The reporter told the President, his son, Don Jr., joked during a radio interview he’d lobby POTUS to pardon Joe Exotic for the memes “and just for frankly watching the media reaction to this thing.”

That didn’t stop him from also saying he’d look into it. For good measure, he also asked CNN’s Jim Acosta a reporter Trump often feuds with if he thought a pardon was a good idea.

Are you on his side? Are you recommending a pardon?” He then polled the other journalists in the room asking, “Would you recommend a pardon?” Maldonado-Passage issued a call for a pardon from Trump and announced a $94 million lawsuit against the federal government March 19 on his Facebook page.

The seven-part docu-series on Maldonado-Passage, “Tiger King: Murder, Mayhem and Madness,” has been a hit with Netflix viewers — drawing 34.3 million unique viewers in the first 10 days since its March 20 release.

As you know by now Joe Exotic’s behind bars after he was found guilty of a murder-for-hire plot targeting his nemesis, Carole Baskin.

See all the nominees for SAG Awards 2019