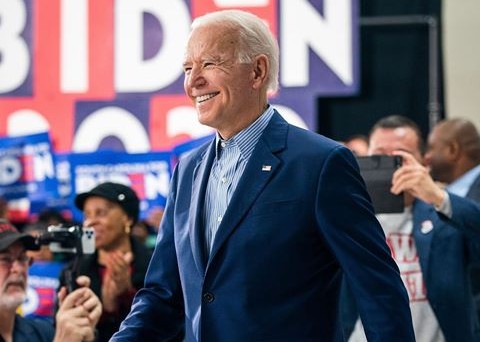 Former U.S Vice President, Joe Biden has taken the lead to be the Democrats’ challenger to Donald Trump after he clinched vital wins in Texas and eight other states in Super Tuesday.

Joe Biden won Texas after a dramatic count, where he scored a sensational comeback sweeping up the South and taking Virginia, North Carolina, Alabama, Oklahoma, Tennessee, Minnesota, Arkansas and Massachusetts.

He is now on track to win ten of the 14 states, as the Democratic race is now looking more like a two-horse race, as the other candidate who is also having a good run, Bernie Sanders took home the biggest win on Super Tuesday, by claiming California.

The contenders were neck and neck in Maine where Joe Biden has a one-point lead with 34 per cent of the vote to Sanders’ 33 per cent.

The remaining Democratic candidates’ battled for delegates in 14 states and one US territory with a series of high-stakes elections that marked the most significant day of voting in the nomination fight.

Bernie Sanders’ conclusive win in California signalled a huge reversal in a state he lost four years ago, but he scored just three other decisive victories: his home state of Vermont, along with Utah and Colorado.

Claiming the top prize threatened to change the narrative of a night that was otherwise seen as a big resurgence for former Vice President Joe Biden, who claimed the battleground states of North Carolina and Virginia in a strong showing early on.

Texas, the second biggest prize of the night, was initially a close race between Mr Sanders and Mr Biden however, projections have shown Joe Biden as the clear winner before people had finished voting.

Bernie Sanders had been favourite to win the race since his landslide victory in Nevada in February.

As of 10am (GMT), Mr Biden had a total of 453 delegates to Bernie Sanders’ 382, Elizabeth Warren had 50, Michael Bloomberg 44, Pete Buttigieg 26, Amy Klobucher seven and Tulsi Gabbard one.

Joe Biden establishing a lead of 72 delegates over Mr Sanders, he is now projected to win ten out of 14 states.