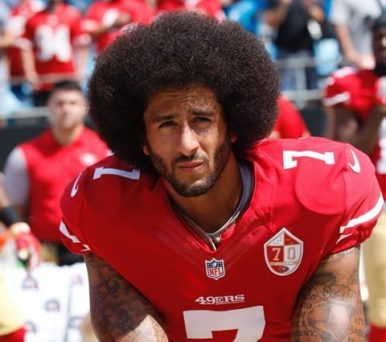 Colin Kaepernick Sets For A Private Audition With NFL Teams

Finally, there is a light at the end of the tunnel, as free agent, Colin Kaepernick sets for a return to playing professional football again. This was confirmed by the player himself, and some news reports have it that the former Pro Bowl quarterback is set for a private audition with some of the NFL team managers on Saturday in Atlanta.

Could this move be as a result of the JayZ’s deal with the NFL, or is just the League trying to move forward and halt all the negative press, or Colin Kaepernick consistent pressure on the NFL paying off at the end? Well, the league is yet to confirm this latest development, but Colin had on Tuesday taken to his Twitter handle to share this information about a possible comeback. He said:

“I’m just getting word from my representatives that the NFL league office reached out to them about a workout in Atlanta on Saturday. I’ve been in shape and ready for this for 3 years, can’t wait to see the head coaches and GMs on Saturday” he had twitted.

As reported by Associated Press, person familiar with the plans had told one of their reporters that the league’s decision to invite all 32 teams to watch Kaepernick “came out of the blue with no prior communication.” The person said Kaepernick’s team was given a 2-hour window to accept the invitation and was denied a request to schedule the tryout on a Tuesday or another Saturday.

Kaepernick hasn’t played since 2016 with the San Francisco 49ers. He helped start a wave of protests about social and racial injustice that season by kneeling during the national anthem at games.

The NFL in February settled a collusion grievance Kaepernick and former teammate Eric Reid filed against the league. Reid now plays for the Carolina Panthers.

This without a doubt, if confirmed by the League, will be welcomed by all, irrespective of what might have happened in the past, even though it will still not stop the Police brutality on African-Americans and other minority race, it is a good step going forward for stakeholders.

A few weeks ago, Kaepernick had slammed rapper Jay Z and Roc Nation for announcing a business partnership deal with the League owners, telling the husband to Beyonce that ‘We haven’t moved past anything’ but with this news of him likely returning to playing the American football again, all parties can now take a seat and have a positive discussion on these issues.

“My Sister, the Serial Killer,” by Oyinkan up for women’s Prize

Meghan Steps Out For One Young World Summit In London