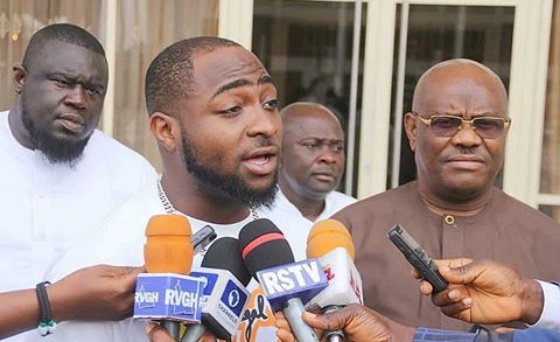 Appeal Court rules in favour of Adeleke, was eligible to contest

Popular Nigerian musician, Mr David Adeleke, also called Davido, has confirmed he is now a politician, as  he names Rivers Governor Nyesom Wike as his godfather.

“I am also here to see my godfather, Gov. Wike and to support his second term bid.

“I am planning a talent hunt show in Port Harcourt, one of the lucky artistes will perform at my show in Lagos on Dec. 27,” he said.

David Adeleke, who made the pledge in Port Harcourt on Sunday when he visited the Rivers Governor, also said he would also institute a talent hunt show for Rivers-based artistes.

He said the programme would be in line with his discussions with the State Government to support new generation artistes in the state.

The musician was in Port Harcourt for a musical show tagged: ‘Plugged’, where he was billed to perform alongside other Rivers-based artistes.

David Adeleke said he was also in Port Harcourt to wish Wike a happy birthday, adding that in the forthcoming year, there were several things he was planning for the good of the music industry.

Davido who also celebrated his 26th birthday on November 11, was accompanied by the organiser of the show, Mr Chima Aguma, and Music Promoter, Soso Soberekon.

In his remarks, Gov. Wike promised to support the entertainment industry, to create jobs for the youth.

Davido got involved in politics in September when he rolled out the drums to campaign for his uncle Senator Ademola Adeleke who failed to clinch the governorship seat of Osun.

Davido moved from town to town in Osun mounting PDP vehicles to the delight of music freaks.

Billboards in the state also show pictures of the singer in traditional dress, leaning on an empty black leather chair next to the Nigerian flag.

His grandfather, Raji Ayoola Adeleke, was a senator between 1979 and 1983 while another uncle, Isiaka Adeleke, was Osun’s first civilian governor from January 1992 to November 1993.

Isiaka Adeleke later became a senator. He suffered a heart attack and died on 23 April, 2017 at Biket Hospital in Osogbo, the Osun state capital.

Buhari inherited N7trn as debts and liabilities in 2015-Zainab Ahmed

PHOTO: See all the Europa draws for round of 32